What is a googol?

In googol is the number that is printed with a one followed by one hundred zeros when using the decimal system. 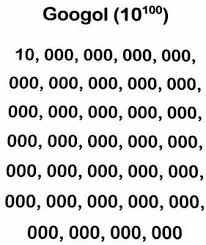 or potency form, ten raised to one hundred.

The term was introduced by Milton Sirotta (1929–1981) at the age of nine. Another name for the same number is ten sexdeciljarder. The number of elementary particles in the universe has been estimated at
10^80 pieces, that is, one hundred trillion times less than a googol.