Have done a couple of IQ tests through the life

The first time was at enlistment as it is called, when the military testing which ones fit for military service. It was a traditional test with graphic shapes lying in the given pattern and so, there is no figure to be filled in. The stupid thing with the test was that we got to know the results, but not the answers. – How smart is it? 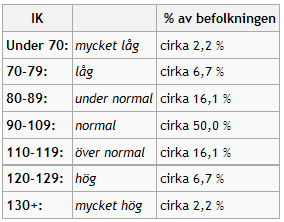 My result then became IQ 100 and 100 is the most common IQ value in a population. IQ is short for Intelligence Quotient derived from the German term Intelligenz-Quotient. It is a statistical measure of the normal distribution of the results of intelligence tests. That is, 95 % population has an IQ between 70 and 130 and 100 most, as 50%.

The next time was when I started my first company and joined a training developed by Almi. The training was clearly indoctrinated by the state. The propaganda was formulated by type, “…count yourself up to real profits”. Why to do an IQ test to learn how entrepreneurship can think about but my result this time was the IQ 115. To get an idea of ??IQ, you may want to relate to that Mensa, which is a non-profit organization for people with high IQs have the requirement to perform a result among the top two percent of the population on a standardized intelligence test. In other words, to achieve 131 on the Wechsler IQ scale, which is higher than 98% of the population. 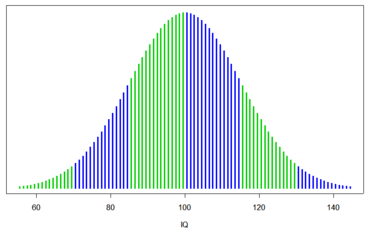 It may be helpful to know recognized human IQ. T.exe. Einstein, many times a symbol of IQ, he is defined by IQ 160. Then it starts to make sense what these IQ values ??have representation. Here are some interesting philosophers IQ; Spinoza IQ 175, Descartes IQ 185, Leibniz IQ 205, Edge IQ 175, My two favorites; Wittgenstein IQ 190 and Hume IQ 180.

The third time was associated with an IT job that I sought. The condition was to undergo several tests were of the IQ. This time it was the end 110. I thought it was okay but I did not get the job. Do not know if it had to do with my IQ but if it now costs to make these tests, it would have an impact on the client. Writing some examples of artists IQ. Handel IQ 170, Goethe IQ 210, Rembrandt IQ 155 and Jodie Foster IQ 132.

Ten years later, it was time again. This time, more voluntary. Made up Internet [Eng] a simple test I did on 19 minutes. I think it's very crowd-pleasing test, but I have no evidence other than that I got overly high IQ with 125 which is the maximum for this test. Consider that less than 2 % of the population have IQ 131. But who has time for the IQ 100?; Andy Warhol IQ 86, Muhammad Ali IQ 78, and George H.W. Bush IQ 98. 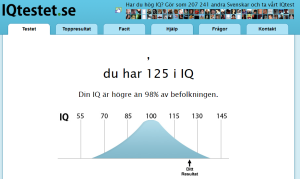 The economists Bryan Caplan and Stephen Miller examined people's opinions and how they were related to their cognitive ability. They argue that those who had more positive attitudes towards immigration, trade and free enterprise performed well on IQ tests. They even claim that those who performed well on IQ tests in less seemed to believe that society and its economy is a zero sum game but rather that cooperation and exchange at a lower term is beneficial for both parties.

If you want to try IQtestet so click on the picture above.